Driver Now Being Driven by Christ

Meet Paulin Lindor a 33 year-old Haitian man, the youngest of a family of three sisters and two brothers. He was born and raised in a village at the feet of the Citadel. His father is a farmer and his mother died when he was seventeen. After the death of his mother he moved in with his grandmother and later with one sister after another in Cap-Haitien where he now resides. He is a single father of a 6-year-old boy.

His first job was as an apprentice mason at the Children of the Promise orphanage in Lagossette Haiti. Between construction jobs he joined his brother’s business; driving missionaries, groups and North-American volunteers around. When the Orphanage began a morning shuttle service for their employees, he gradually left the construction field to become a full time public transportation driver (Tap-tap).

The Gambade Clinic Project first contracted his services in 2016 as a driver for our different Teams and Groups. Traditionally drivers do not engage in lengthy conversations with the people they shuttle around,  and therefore he never capitalized on the opportunities to develop enough English to feel comfortable outside of his creole language. When one engaged him in creole, we discovered that he is full of stories. 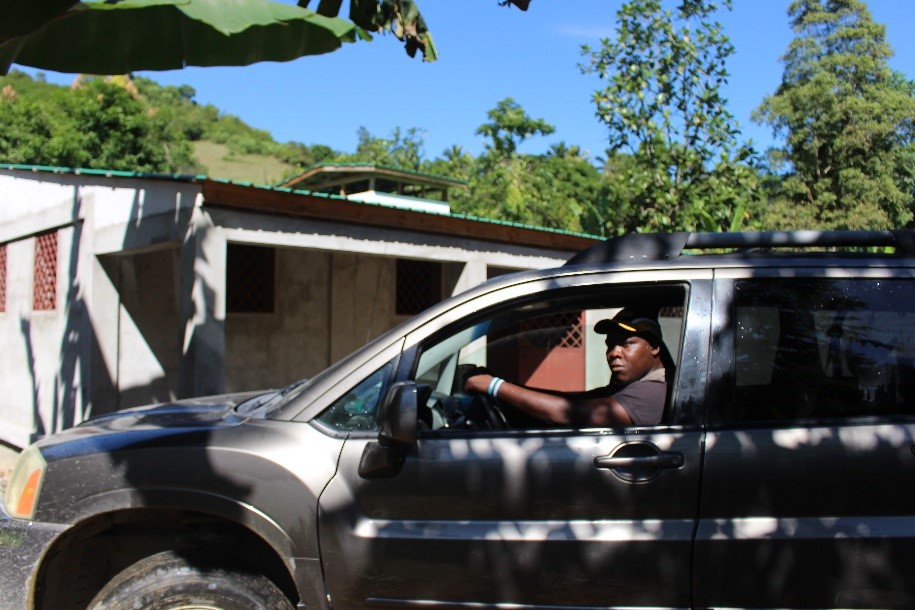 Appoline and Wesley of the Gambade Clinic Project had some opportunities last Spring, 2017 to challenge Paulin’s about his spirituality as they read, translated and discuss the Daily Bread Devotionals during the morning rides to the Project site. Paulin hesitantly began sharing his spiritual journey, his many questions regarding some legalistic practices of certain denominations or churches he visited from time to time. He patiently listened to Appoline and Wesley’s explanations of what the Bible says and specifically about who Jesus is and what He offers to each one of us.

One evening after a long day on the construction site while driving he asked, “Can you help me to be converted?”

It was a joyous occasion when he stopped the car in the middle of sugar cane fields and received Christ in his life. There was not a moment of silence in the car after that. Words of encouragement, thanksgiving and praises to God filled the rest of the trip.

When Paulin got reacquainted with Appoline and Wesley in the Fall 2017, he expressed his continued commitment to Christ, his desire to be baptized and how he had been sharing with his friends about his new-found faith. He has found the indescribable joy of allowing Jesus to be the driver of his life.

Thank you for supporting the work of the Lord in Gambade.