Jesus never used His healing miracles as bait for preaching the gospel or for gaining publicity, nor were they a public relations tool. He did not exploit healthcare for the purpose of marketing His spiritual program, or as a magnet to draw people to some hidden agenda. He did good for their bodies because He was good. Even feeding the hungry was not bait to get the crowds to listen to Him. The disciples had suggested the people find food in the nearby markets, but compassion drove Jesus to feed them.

Jesus, in announcing His mandate, quoted the Old Testament:

The Spirit of the Lord is on me,
because he has anointed me
to proclaim good news to the poor.
He has sent me to proclaim freedom for the prisoners
and recovery of sight for the blind,
to set the oppressed free,
to proclaim the year of the Lord’s favor.” Luke 4:18-19 NIV

Jesus’ works were a demonstration of the Kingdom He came to announce. Luke introduces Acts by referring to an earlier book in which he dealt with “all that Jesus begun to do and teach” (italics mine); and when Jesus healed a deaf and mute man, the people were astonished exclaiming, “He has done everything well, He even makes the deaf hear and the mute speak.”

Jesus’ earliest followers implemented acts of kindness in His name and on His behalf, not for personal gain or to curry favour. They did so simply because Jesus taught them to be kind. (Acts 3:1-10.)

Since then, Christ-followers have led in some history changing actions. For example, the campaigns against slave trade led by William Wilberforce and his friends. Their struggle took decades of patient team work involving Christians who were also proclaimed the gospel to everyone.

In 2015, members of an EMAS team in Asia, met a blind old beggar outside a mosque. They tried engaging him in casual conversation but he was abrasive and unfriendly. They prayed silently for the man; then went to a nearby market and bought shoes, fruit, and water for him. When they tried to re-engage in a conversation, the man covered his ears and refused to talk to them, so they gave their gifts and sang a hymn. The old man’s demeanour changed, a wide smile lit up his face as he rummaged through the bag and found the new pair of shoes.

He was still blind and he was still outside the mosque where EMAS volunteers found him and left him. 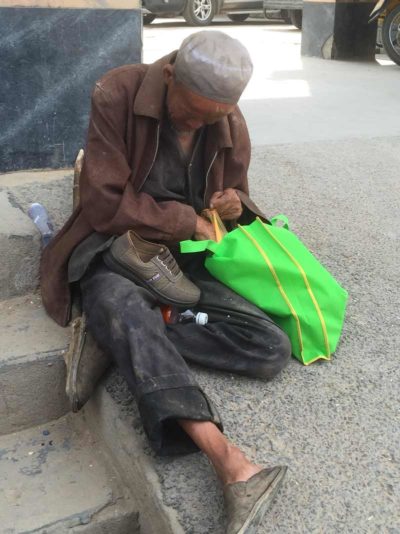 The old man’s image holds pride of place in our office reminding us to pray daily for blind old men who beg outside mosques, and to be thankful for the privilege of serving men and women all over the world by giving the thirsty something to drink.

The interdenominational nature of EMAS Canada’s teams has enabled us to benefit from the strengths of fellow believers who emphasize healing and service as vocations. This mindset has kept us relevant and welcome in places where non-citizens are not allowed to carry out religious activities.

In the lesson of the Good Samaritan, Jesus drew attention to the Samaritan as the example of good neighbourliness: the kind that pleases God. For EMAS Canada, that person in need for whom we will cross the road—or an ocean, and participate in their lives to bring healing, and restoration becomes an opportunity for God to prove that we are in His kingdom. Jesus taught us to be like the Samaritan.

EMAS is responding to surgical needs by going to an area where plastic surgery is unavailable. For 25 years, our volunteers have performed life-changing operations. In the case of one family, three generations suffer from a marked upper eyelid drooping that obscures vision. A mother and her child gained improved vision through our China South surgical team. 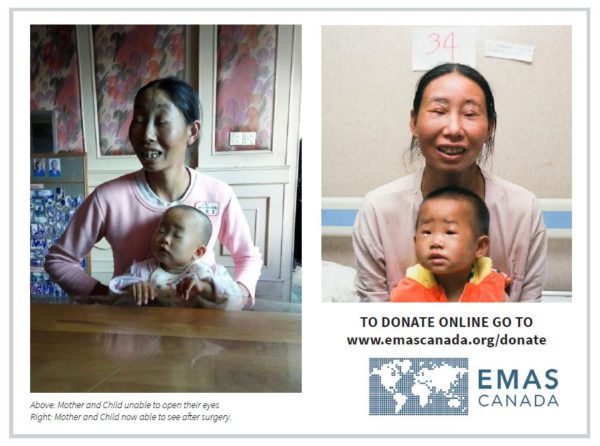 The team’s fundraising efforts and donations by team members pay for these medical services. However, this family cannot afford the $200.00 to get the grandfather to the clinic where the EMAS team would perform the surgery at no cost to the family. We are eager to find the resources and provide the help for him. Donations toward this cause are accepted online through our donation page.

The Samaritan took personal care of the man in need, gave personal resources, and took a personal risk to show mercy and selfless compassion. We apply Jesus’ teaching in the protection of those who do good. A few years ago in China, driven by a concern over the erosion of fundamental decency, one city adopted the Samaritan Principle into its laws.

Jesus went beyond fundamental decency. He represented God who was truly heart-broken by our infirmities and who chose to speak of Himself as a tender-hearted and caring shepherd.

Jesus’ teachings make a universal platform for service and collaboration. In EMAS Canada we make the compassion of God tangible through the work we do and we explain and teach about Him every time we get an opportunity to do so.

Every year new opportunities for service arise. We expect to respond to needs in Zimbabwe, Malawi and Haiti during 2019. For information use this email contact.