Our Plan to Build a Second Medical Mission’s Base

Early this year, the Lord renewed our mission: “Go show mercy and proclaim Christ’s Jubilee among the lost, the least, and the last in the dark.” He has shown us great opportunities to bring the people of Myanmar into His Kingdom of Light. Our first base, Yuzana Medical Center, is located near Yangon (formerly Rangoon). The plan is to build a second base in Thanbyuzayat, in Mon State, to accommodate medical missions to the southern strip of Myanmar.

Due to years of fighting between the central militia and the Karen armed forces, countless Karen people became refugees along the Thailand border. Recently, it has become much harder for the refugees to stay in Thailand while Myanmar has become more open. This is a golden opportunity to reach out to the Karen people who are now returning to the villages that they had originally abandoned for Thailand. 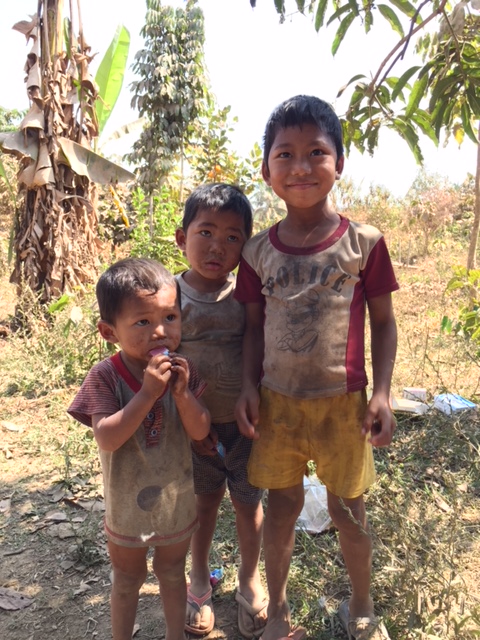 Children we saw at one of the remote Karen villages during our February 2018 Missions trip. We travelled by bicycle.

Our medical missions work started in Mae Sot, Thailand where we served the refugees and we supported some of them in their Bible school training. Now that Myanmar has opened up, these people want to go back to plant churches in the areas where they originally came from, among their own people.

The building of this medical mission’s base will be the beginning of construction and serve as a model for the houses expected to be built for the returning refugees who lost their homes when they were burnt down during the civil war. The Lord has provided us with a retired engineer from Germany to stay here long-term to head up the building project. The building is about 2500 square feet and being built for less than $ 10.00 per square foot. It is designed to last for 20 years, much longer than the two years life of the traditional bamboo huts built by the local people in their traditional way. This is a great investment in God’s Kingdom and His people.

The Lord has also sent his faithful servant, a pastor of the Mon Baptist Churches Union, who has provided the space for us to build this missions base. He knows many pastors in Karen State and Thanintharyi State. Our recent missions to the remote villages in these areas and others to the north, have resulted in many more requests for our team to go and serve.

Building our Mission’s Base in Mon State is strategic for our future missions to reach all three states. We will use this base to host our missions team, and to store our equipment and supplies. We are ready to take this next step. The estimated cost of the building is $23,500.

Please join with us in raising these funds and getting our medical base built.