Hand in Hand with Haiti

Trip On Hold Due to Travel Advisory 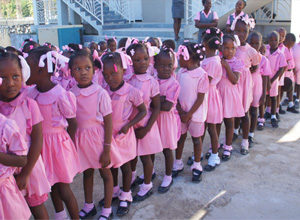 One EMAS Haiti project, called Hand in Hand with Haiti, is a partnership between EMAS Canada and the El Shaddai Church community in Port-au-Prince. It has four major areas of focus:

By working ‘hand in hand’ with the El Shaddai Church community, this project provides a beacon of hope, that points to a better future for this Haitian neighbourhood.

In 1982, Dr. Pierre Plourde visited Haiti as a medical student with the help of an EMAS-sponsored practicum. His Creole language tutor was Saint Hilaire Faniel. Through two more visits and correspondence the relationship blossomed.

In 1993, the new seminary graduate, Pasteur Saint Hilaire established El Shaddai Church and within a year, the community started a supplemental nutrition program for the neighbourhood children. In 2005, Imago Dei Primary School was established with 3 kindergarten classes (3, 4, and 5 year olds); Grades 1 through 8 has been added since. EMAS Canada continues to support this program monthly.

Saint Hilaire’s leadership and selflessness were truly inspirational but tragically, Saint Hilaire was murdered in the course of a break-in at his apartment in December 2008. The El Shaddai church honours his memory by continuing the work Saint Hilaire had begun.

To make room for growing ministries, land was acquired in 2005 by El Shaddai Church to build a Community Ministry Centre. Progress was slow, but in the aftermath of the 2010 earthquake, eMi met with the community elders to design an affordable earthquake & hurricane resistant ministry centre that would include a large community gathering space, a primary school, and a community health clinic.

In spite of political and economic upheaval making any initiative in Haiti extremely challenging, EMAS Canada has supported efforts of the El Shaddai Church since 1996 and Dr. Pierre Plourde has been leading EMAS Healthcare Teams to Haiti since 2004. Throughout this time the El Shaddai Church has remained a beacon of light in the midst of seemingly insurmountable obstacles. 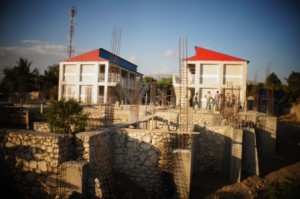 2014:  The eMi construction plans for the El Shaddai Ministry Centre include a community gathering space (serving as a church, youth centre, school assembly hall, and hurricane/disaster relief shelter), a primary school (2 buildings), a healthcare clinic, and a guesthouse. The project is proceeding in stages. Construction of the first school building was completed in October 2011, the toilet building February 2012, and the second school building February 2013.

Construction on the next stage of the building project has begun. The foundation for the community gathering space (total estimated at $250,000 US) is well under way. Subsequent construction projects will include the courtyard with ramp access to the main floor of each of the buildings, water tower, kitchen, clinic, guest house, play area and garden. Donations are welcome to continue construction.

You can Help Haiti Build Better than Before by supporting the El Shaddai Church with a financial gift.
The following are examples of what your donation can make possible:
• $50 funds one square foot of the earthquake and hurricane proof construction project
• $165 will provide a hot meal for all of the students and staff at Imago Dei School
• $450 covers the cost of a full year of education and meals for one child at Imago Dei School

Learn more at handinhandwithhaiti.org
Donate to Hand in Hand with Haiti
Donate to the Emergency Relief Fund 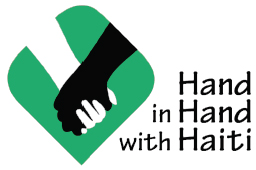